Northern Liberties has another new hot spot that is sure to keep a stranglehold for some time on all bragging rights to everyone’s palette.

Located right under the Girard Avenue El stop at 1253 N. Front Street, the Front Street Cafe has only been open since last Saturday, but?is certainly turning the heads of everyone passing by the?incredibly busy intersection. From gluten free to free range, herbivores and carnivores,?this cafe has all of today’s picky eaters and special?diet?fanatics covered.

Andrew Petruzelli, executive chef and general manager (you kids in the Gayborhood know Andrew as being crowned the first Mr. Gay Philadelphia in 2007, and as the Karaoke host at Woody’s for several years), has gathered an amazing crew for the cafe, ready to serve up what can only be described as a fresh, foodie paradise.

“Mostly everything is made in house with the exception of a few, locally sourced, small business food items,” said Pertruzelli, whose smile was gleaming while staring at the juices being made fresh at the counter. At a quick glance around the cafe at 8am, customers were already coming in, getting their juice,?and?starting their day. Catching my eye was a customer purchasing a bright and beautiful Dottie’s Donuts (vegan), and a fresh coffee. The Front Street Cafe featured Counter Culture Coffee. Looking to the other side of the counter were beautiful juices, coconut yogurt, chia pudding, and all kinds of dee-lish happiness. The cafe features all organic juices and?teas, as well as smoothies made with matcha (finely ground powder of specially grown and processed green teas), hemp seed, chia bubbles;?everything to fine tune your body and instill pure joy.?Andrew’s favorite juice of choice is the “Firefly.” “It has a great, ginger bite at the end with carrots, pineapple, and lemon.” Petruzelli said.

For the meat-eaters, nonvegan items will also be available. 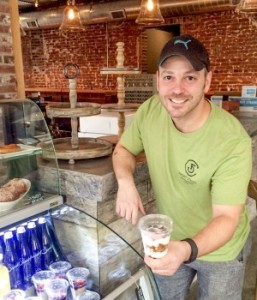 “We are very vegan friendly, and there are some items that are animal protein foods;?cheeses that are sourced from creameries across the US that are organic and/or working organically.?Also, we will have the Schooner Bay salmon out of Vancouver-this salmon is caught fresh when we order it and shipped right to us, and it is never touched until the chef gets it, We filet it in house and also cure it.” said Petruzelli.

Of course, any place that wants to please everyone has a burger on it’s menu, and the Front Street Cafe has one ready for you created from a blend of dry, aged beef with chuck. For the plant lovers, the mushroom burger offered will be made with mushroom fa. “Normally (with a fa) it would be a beef based broth with beef meatballs, but we are doing it with a smoked mushroom that we smoke in house, then take all the pieces and make the broth, it is very hearty.” Petruzelli said. “Everything we have has a good amount of umami, a feeling of being satiated, which is important to vegans.”

Organic rotisserie chickens will also be a big feature on the menu. “Animal based protein items are a bit more of our comfort food, so we have a good array for everyone.” said Petruzelli. “If you read through our menu, you would not know that we were so plant-based. We are not supplementing things like ‘fake chicken;’?we just compose dishes that are really intriguing because they are good food. They happen to be healthy and happen to be plant-based.”

Another amazing note:?everything brought into the kitchen gets used. According to Andrew, “Nothing is wasted, all of the vegetable scraps go into a stock, and all parts of our fish are used. We use them with fresh lobster in our lobster chowder.”

One exciting option that will stand out will be the snack boards. They are vegan, some are even raw,?but Andrew promises that “you would never know”.

Andrew presented me with his matcha smoothie:?fresh mint, cocoa nibs,?a base of coconut meat, and banana. It was one of the greatest things I’ve ever put in my mouth -?and trust me, I’ve held some spectacular things in there!

While I frantically tried to get every last drop of the matcha smoothie into my body, Andrew told me about their green pancakes which are created from juicing spinach and kale as a pancake base. They will be gluten free with the cafe’s own blend of flours made in house, and then topped with nuts, seeds, fresh fruit, and microgreens. This heaven on a plate is served with agave or real maple syrup.

The Front Street Cafe coffee shop opens at 6am, and breakfast will begin at 7am. Full brunch will be served 9am everyday until 3pm. Dinner will start at 4pm and served till 10pm, and the place stays open till 2am! I feel like my food fantasy dreams and prayers have all been answered and it’s not even the holiday season!

If you are not totally sold yet-here’s five words to seal the deal: Veggie bacon and veggie scrapple. Yep, made in house as well!

So if anyone needs me, you know where to find me.