That?s not the most important factor in deciding where a major news organization sets up for a remote broadcast, admits Al Henkel, senior coordinating producer for newsgathering at NBC News ? but it sure does help.

Since Tuesday, Henkel and his team have been posted at Front Street Cafe in Fishtown, helping coordinate MSNBC broadcasts in advance of next week?s Pennsylvania primary. All of the network?s daylong political coverage has been coming out of the sunny corner at the back of the cafe-slash-bar, including reports by well-known anchors like Andrea Mitchell, Thomas Roberts and Erica Hill. 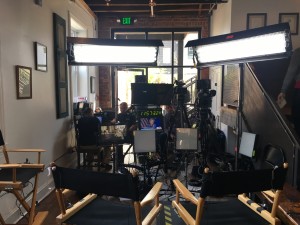 Producers poke emails into their laptops at the granite counter and watch monitors set up next to tables on the second floor, while technicians tweak controls in the impromptu studio beneath industrial wood-beam ceilings. There are three satellite trucks parked outside, and dozens of thick cables running across the back patio to two giant ?Infinite Power? generators on trailers in the petite lot out back. 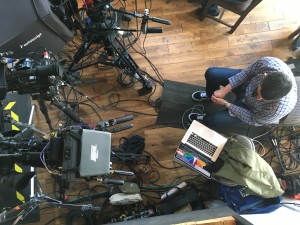 MSNBC Sets up their mobile Studio at Front Street Cafe

How did all this end up beneath the El at this relative newcomer (it opened last fall)?

?[Front Street Cafe] was recommended to me by some MSNMC folks at the airport when I got off my flight from Dallas,? said Henkel, who spends an average of 190 days a year on the road. This primary season alone, he?s scouted and found shooting locations in Iowa, New Hampshire, South Carolina, Florida, Ohio and Wisconsin, before landing in Philly.

From the airport, he got in his rental car and drove out to 1253 N. Front St. Stopped in, grabbed a cuppa ? ?I like it because it?s strong!? ? and surveyed the scene. He liked what he saw almost immediately, but from experience, knew he should at least explore other options. He connected with tech manager Zainib Naseer, and together the pair checked out at least 20 additional locations. After all that, they ended up back where they started.

?The most important thing is that there are good satellite views,? Henkel explained, ?and space to park the trucks.? In addition to the coffee, FSC had other good things going for it, he said: The staff was nice and the clientele was diverse, with people coming in and out often (?They like it when the background isn?t static.?). The decision was made. All that was needed was permission from the cafe owners.

Andrew Petruzelli picked a bad day to take a break from his phone.

It was Wednesday, April 13, and he was enjoying a rare day off from his job as director of operations Front Street Cafe. He had no idea MSNBC staff was frantically trying to reach him about the possible MSNBC deal until the next morning ? and when he came down to work at 8 a.m. Thursday (he lives above the shop), he found Henkel and Naseer waiting for him.

A longtime high-level employee at high-profile hotels ? he was executive sous-chef at the Hyatt at the Bellevue and then at the Grand Hyatt DC ? Petruzelli immediately recognized the benefits of hosting the broadcast.

?They?re not paying us rent or anything,? he said. ?But national coverage for my cafe is fine by me!?

He got the blessing of FSC co-owners Lee Larkin and Nicole Barclay, and gave Henkel the go-ahead.

Six days later, the NBC crew arrived, literal tons of equipment in tow. They asked Petruzelli to help secure parking spots for the trucks along Thompson Street (he left notes on parked cars offering people free coffee if they?d move), and hauled lights inside. On Tuesday morning, broadcasts began, and they?ll continue through Friday night, when the team decamps for Pittsburgh.

Things have generally been running smoothly. The cafe is spacious enough that the temporary TV studio isn?t really infringing on regular business, and producers are happy with the look of the shot. The one snag ? if you could call it that ? was when reporters tried to do some man-on-the-street interviews on Wednesday without realizing that the date might affect subjects? state of mind. 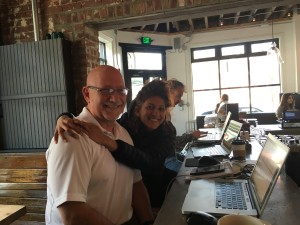 ?Do you mind if we walk around with a mic and ask customers some questions?? producers asked. Within 15 minutes, they returned ? no one they spoke with was quite coherent enough to appear on air. ?Yeah, we can?t use any of this,? they told Petruzelli, who replied, ?Welcome to Fishtown on 4/20!? ?Check out MSNBC here.

?They won?t tell us their guests ahead of time,? Petruzelli said, but noted rumors had been flying around that both Mayor Jim Kenney and Gov. Tom Wolf might make appearances. Staff is also hoping a presidential candidate will stop in ? ?My gut is telling me Bernie,? said one of the baristas ? but NBC?s Henkel put a kibosh on the idea. ?No. Bernie is not coming. Sorry.?

Overall, Henkel has been thrilled with the spot ? he and his crew have been eating all their meals at the cafe (workdays can start as early at 3 am and continue through the night) ? and he?s even asked about securing the location during the DNC this summer.

?This isn?t an easy town to shoot from ? all the streets are so narrow,? he said. ?I?m not certain we?ll be coming back to Philadelphia, but I?ve been doing this more than 20 years, and I think it?s pretty likely. Always better to be prepared.?