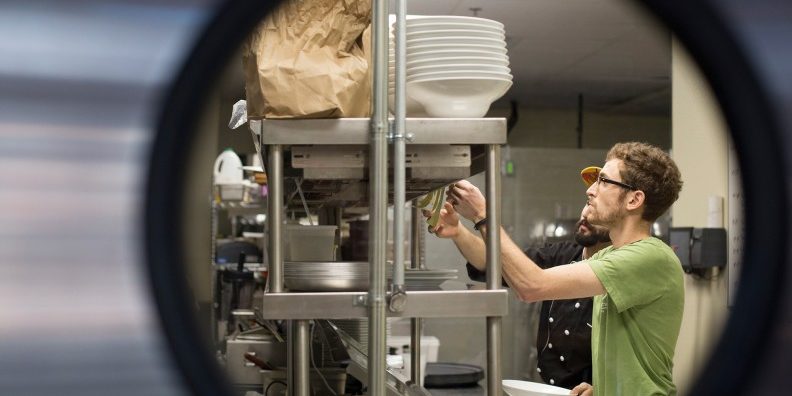 Front Street Cafe boasts an all natural and plant-based menu

When real estate businessman Lee Larkin began working in Fishtown, he waited for someone to open a restaurant catering to the needs of the health-conscious. After more than a decade, he decided to do it himself.

Front Street Cafe at 1253 N. Front St. opened as a coffee shop Sept. 21. In addition to organic juices, smoothies, tea and coffee, grab-and-go items are available at the counter like pastries and sandwiches. Next month, the bistro-style restaurant will include dinner service to-go with a full bar. The cafe will be open from 6 a.m. to midnight each day with extended hours to 2 a.m. Friday and Saturday.

Larkin bought the building 13 years ago when he started his real estate ventures in Fishtown. A former parking lot wrapped in an L-shape around the property now acts as an outdoor seating area, complete with salvaged carriage house doors that can open to face Thompson Street or conceal the garden from the street.

For Larkin, eating healthy and limiting meat consumption affects his daily life. With the help of business partner Nicole Barclay, Chef Chris Rubinstein and General Manager?Andrew Petruzelli, they?created a menu that doesn?t alter the experience of guests with restricted diets.

In the kitchen, even the most basic ingredients are carefully considered.

A significant part of Front?s concept is sourcing organic local produce and meats, curating a wine list with mostly organic options and even finding organic liquors to keep behind the bar.

?Thompson Street is on an angle to Frankford, and then it runs on an angle deep into Fishtown,? Larkin said. ?So everyone that walks to the El is funneled right past our front door. La Colombe doesn?t open until 7 a.m., so that?s why we open at 6 a.m.?

In addition to juices like the Firefly (carrot, pineapple, lemon, turmeric and ginger), the coffee bar serves coffee from Counter Culture and organic teas from Rishi Tea. Food items like a quinoa mushroom burger with smoked mushrooms and house-made coconut yogurt are packaged for those who want to run first and then eat.

Petruzelli and his culinary team are working on finalizing menu items for dinner in order for the restaurant to become the spot to start or end the day?or both.

?You only get one chance for a first impression,? Larkin said.

Read the original article on The Temple News